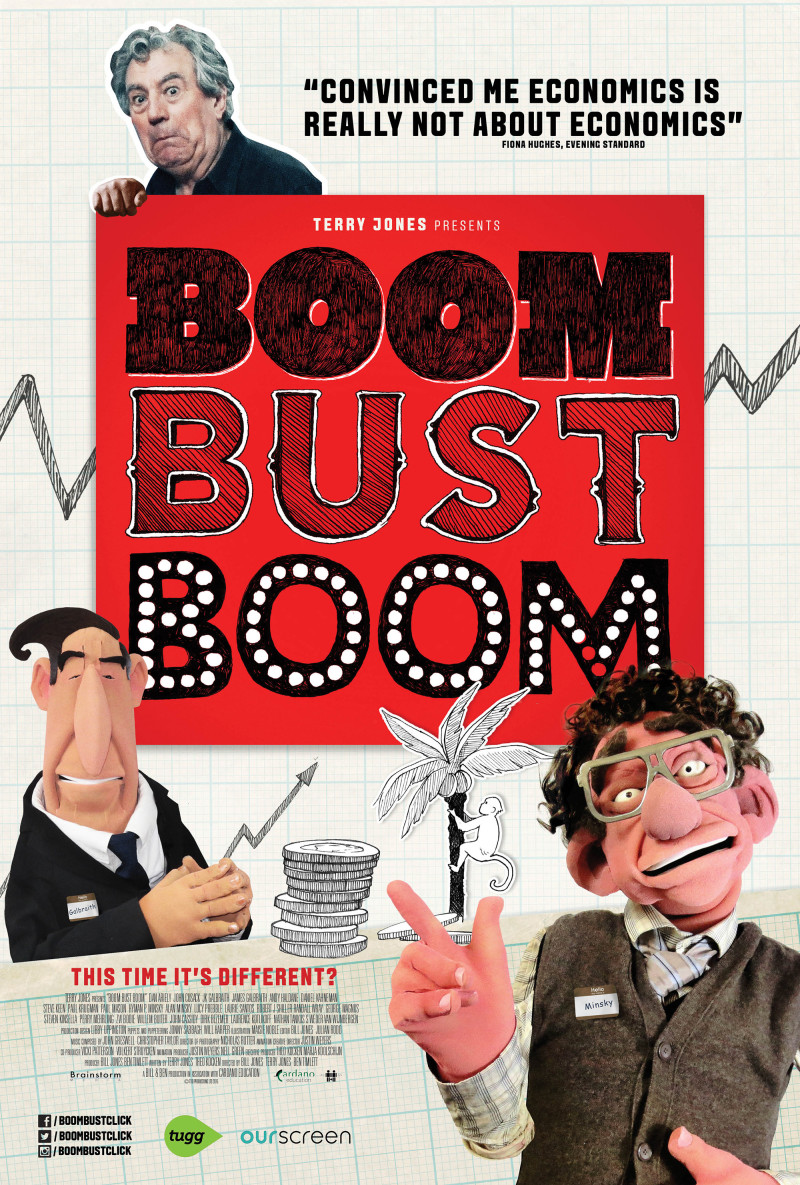 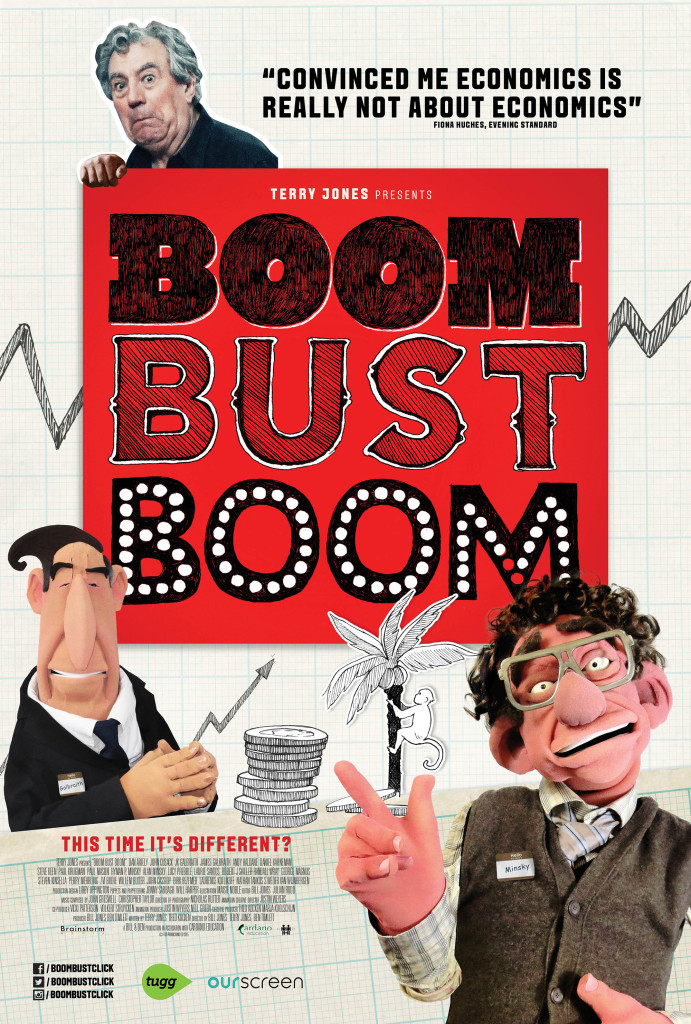 BOOM BUST BOOM the new documentary about the global economy will blow your mind. When I agreed to attend a press screening with my documentarian, anarchist-leaning hubby Joel Sucher I expected a boring doc about the economic collapse of 2008, but the moment the film opened with Monty Pythonesque animation I knew we’d entered the land of Now For Something Completely Different.  Animation, puppets, songs and clever graphics drives the scary facts and figures home. It’s an epic global wake-up call thanks to the filmmaker, Bill Jones, son of Terry Jones of Monty Python fame who deftly co-directs, narrates the film and appears on camera.

If you’re one of the millions who’ve seen The Big Short and still trying to make sense of what went down in 2008, Boom Bust Boom will tear the veil off your eyes. It’s like taking a needed dose of medicine but it goes down in the most delightful way.  I couldn’t take my eyes off the screen as emotions careened all over the map. Best 74 minutes I’ve spent in a long time and that’s no bull.

The film opens theatrically in US today, Mar. 11, at the Village East Cinema in New York, followed by iTunes and On Demand releases on Mar. 15. For the latest updates, follow the BOOM BUST BOOM Facebook community.

Boom Bust Boom picks up on the notion that financial crashes like 2008 – the result of an overheated housing market — are nothing new and to prove it the film takes you on an excursion to 17th century Holland. Just substitute “tulips” for “sub-prime mortgages” and you’ll find yourself in the midst of a mania brought on by the importation of these beautiful bulbs. Folks went absolutely bananas and those with disposable guilders began investing like there was no tomorrow; after all, it was a guaranteed get-rich-quick investment until, like sub-prime mortgages, it wasn’t. In 1637 the Tulip bubble burst.

In similar speculative fashion a cash starved government in early 18th century England backed the creation of the South Seas Company; an effort to sell shares based on trade with South America. In the end the only folks who benefited, per usual, were those already in one the scheme/scam (which included members of government). By 1720, the South Seas Bubble, as it was known, burst the already fragile English economy.

Sir Isaac Newton was one of those ruined, as the film points out, losing the equivalent of 2.4 billion pounds, upon which he famously remarked: “I calculate the movement of stars but not the madness of men”

Which begs the question: why would rational folks make totally irrational decisions when it comes to money? “Exceptionalism,”

according to Stephen Kinsella, a University of Limerick economics lecturer; the pitch for any new investment opportunity is couched in come-on terms: “absolutely one of a kind,” “can’t go wrong,” “get in while you can,” and whether it’s tulips or mortgage backed securities the effect is to cloud the judgement and glaze the eyes of perfectly ordinary, rational human beings. According to the late, great economist, John Kenneth Galbraith (who appears in puppet’s guise) this temporary insanity stems from “an inordinate desire to get rich quickly with the minimum of physical effort.”

Prior to the crash Wall Street popping champagne corks as “exceptional” returns generated by investments in the housing sector kept rolling in, stoked by a chicken-in-every pot sensibility: everyone and anyone who wanted a home got one. Fed head Alan Greenspan spouted buoyant optimism about the future as we raced towards 2008. Then, overnight, Greenspan’s financial world – like Isaac Newton’s before him – totally collapsed. There were “flaws” in the free-market model, he contritely confessed to a Congressional committee investigating the bust.

Boom Bust Boom finds a group of economics students at the University of Manchester who’ve formed a Post-Crash Economics Society to encourage a re-writing of the economics curriculum to make sure that Minsky isn’t forgotten. Given the intransigence of the economics establishment they see this as a tough road to hoe. Visit their page for added resources and what you can do.

Joel Sucher is a writer/producer with Pacific Street Films and has written on a variety of subjects for American Banker, In These Times and Huffington Post.

What else can you do? See the film and tell your friends. History does not have to repeat itself. It’s up to you. Visit BoomClickBoom for screening times, locations and more. When sharing on social use the hashtag #boombustclick