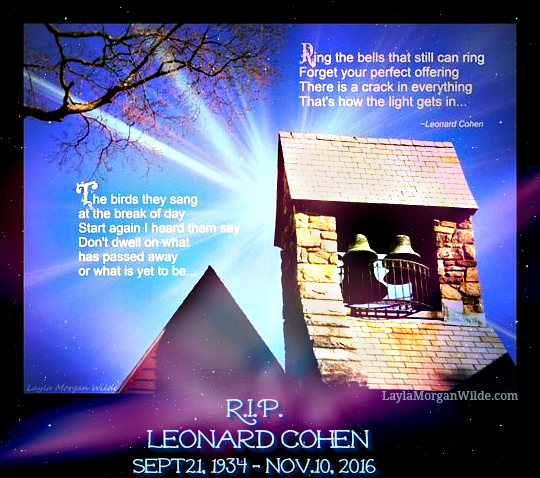 A gloomy week in the U.S. turned darker. The world has lost an iconic poet with a body of work spanning 60 years. Leonard Cohen’s instantly recognizable gravelly voice and ageless wisdom will continue to inspire generations to come.

My introduction to Cohen was in Montreal. We both lived in Westmount at the time and he was our local, shy and beloved treasure before attaining worldwide fame. Always the iconoclast, Cohen could not be pigeonholed. He become an ordained Buddhist monk in later years and settled in Los Angeles where he died.

It is with profound sorrow we report that legendary poet, songwriter and artist, Leonard Cohen has passed away.
We have lost one of music’s most revered and prolific visionaries.

A memorial will take place in Los Angeles at a later date. The family requests privacy during their time of grief.

Over the years of creating photo quotes, a number incorporate Cohen’s song lyrics. I’ve revamped one with lyrics from the song Anthem, from the album: The Future. Sad and disturbingly prophetic in gloomy mood of post-election U.S.A. today. Peace is in jeopardy and if there is a message of hope, fasten your seal belts, we’re in for a bumpy trumpy time. There is work ahead for lovers of peace, love and democracy.

It gets scarier and more prescient with Leonard Cohen’s last album You Want It Darker, published a couple weeks ago on Oct. 21, 2016. He must have known like David Bowie, death was near. Bowie’s last album Darkstar presaged his death by days. Scroll down for the song and lyrics of You Want It Darker.  Also from the album, the song Travelling Light is likely a poignant farewell to his muse, Marianne who died in July 2016.

Careful what you ask for. The signs of our future are there. What timing: to exit the day after Trump gets elected. If this isn’t a wake-up call, I don’t know what is.

The birds, they sang
At the break of day
Start again, I heard them say
Don’t dwell on what has passed away
Or what is yet to be.

Ring the bells that still can ring
Forget your perfect offering
There is a crack, a crack in everything
That’s how the light gets in.

We asked for signs
The signs were sent:
The birth betrayed
The marriage spent
Yeah, the widowhood of every government
Signs for all to see.

I can’t run no more
With that lawless crowd
While the killers in high places say their prayers out loud
But they’ve summoned, they’ve summoned up a thundercloud
They’re gonna hear from me.

Ring the bells that still can ring …

You can add up the parts
You won’t have the sum
You can strike up the march
There is no drum
Every heart, every heart
To love, will come
But like a refugee.

Ring the bells that still can ring…