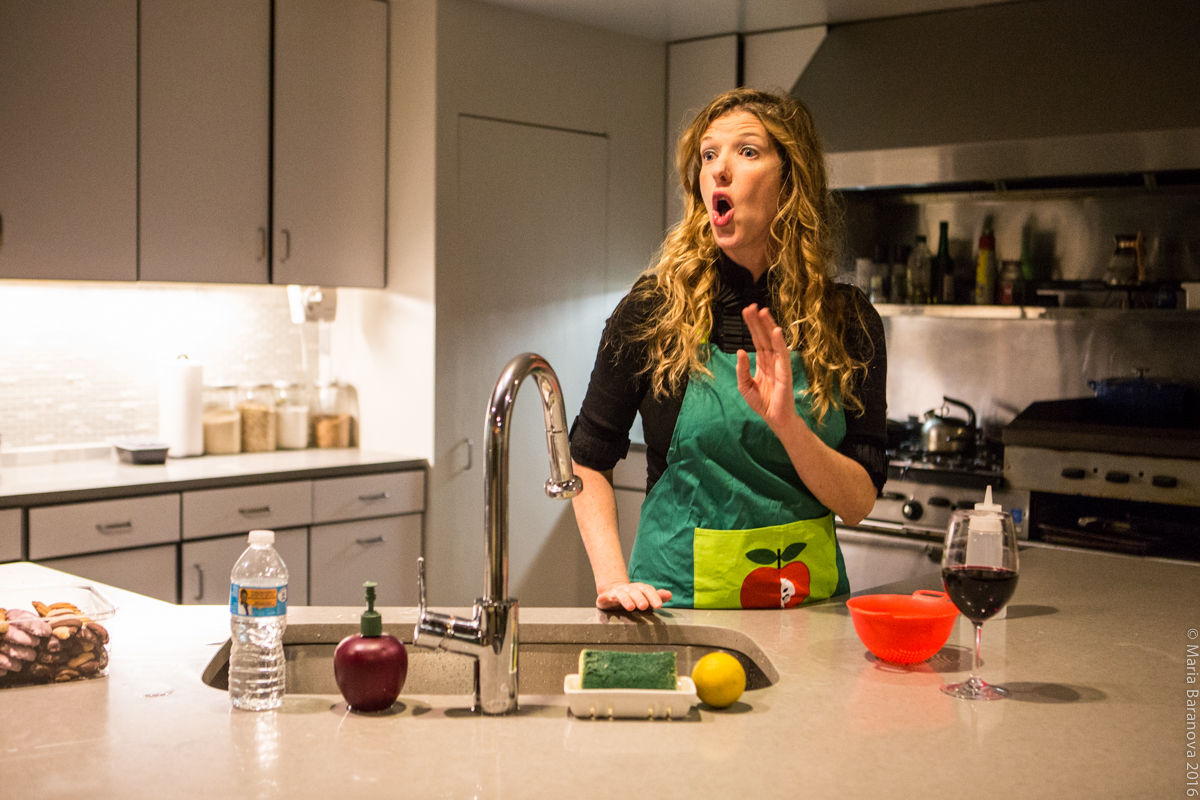 Last Friday I had a ringside seat at Versailles 2016, an immersive theatre production in the producer’s home, a charming hillside Tudor in a Westchester County town near me. I’ve experienced just about every kind of theatre from small-town repertory to Broadway but this was a first.  It felt like going to a house party where you don’t know anyone but the hosts are so lovely they make you feel at home. In this case, the owner, Engarde Arts producer Anne Hamburger welcomed me inside and before you could say, let them eat cake, I was sipping wine and making small talk with strangers.

It was natural to want to play “spot the actor” but the talented ensemble mixed and mingled with aplomb. I can usually spot an actor by their voice and how they project but no matter, we were there for entertainment, the eternal reason for theatre, and they delivered.

When theatre stirs the soul with a deeper message, it’s bonus. The message behind Versailles is about inequality, social and other, about the haves and have nots, the 1% and not only in the context of Wall Street. We may not live like King Louis but everyone in the house (even struggling actors) lives better than the third world where their struggle can be for food, clean water or basic civil liberties.

Scattered in the well-appointed rooms, digital devices streamed images of violence and angry humans who are unlikely to ever participate in this kind of spectacle. As audience “guests” we didn’t to look. The party divided up into groups of about nine and guided from room to room and a series of vignettes. We could enjoy, be amused, escape from our every day woes and be as myopic about our lives or the lives of others because we could. Kudos to Erin B. Mee for her seamless direction in a complicated space.

When we think of theatre, it usually entails rows of seats where we sit until intermission. If you’re an ADHD antsy type  immersive theatre is for you. There is an interactive flow of movement from scene to scene or in the case of Versailles, room-to-room. I sat in on a velvet window seat in the living room, a kitchen barstool, on the hardwood floor of a dressing room, an overstuffed chair in the bedroom and on the toilet seat in the bathroom. The musical chairs choices were mine. I had the freedom to change position or stand within my little group but I was so tired (poor me). In the kitchen, actor Ashley Wren Collins served raspberries and cake with a lesson in global economics. 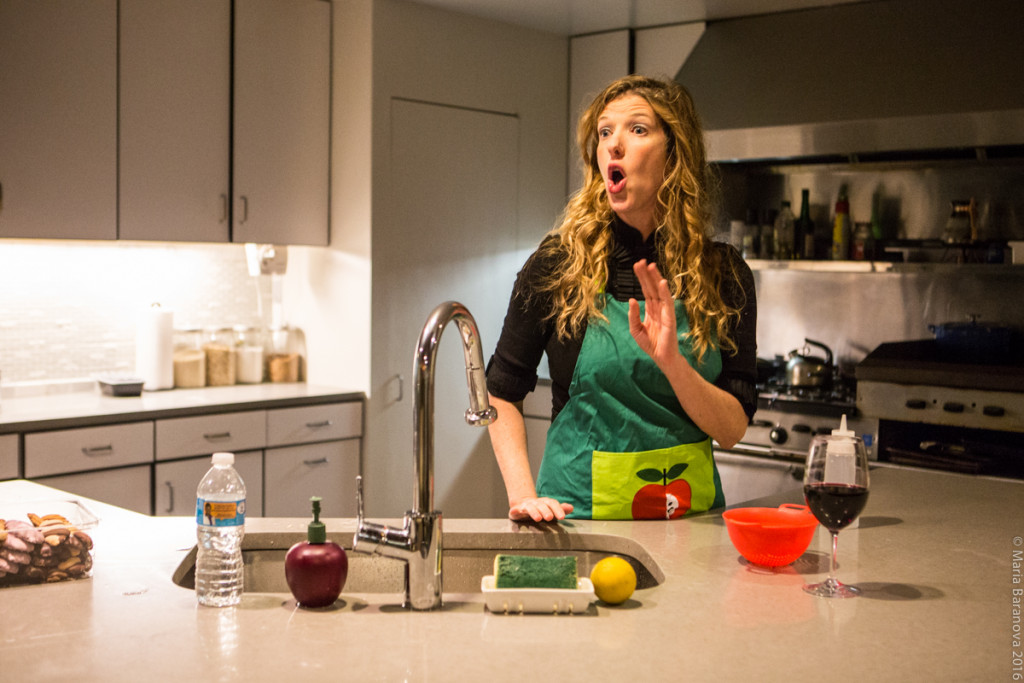 In the bedroom, I chose to sit behind the audience and actors Colin Waitt and Jeff Ronan to observe the 4th wall smash down in an intimate scene between two men discussing an emergency with a dog. In a funny life imitating art moment, a non-actor dog sat and observed. After all, it was his home.

As I sat within patting distance of the bed, it reminded me of the real Versailles. It’s a spectacular palace but the one thing that always stuck out as a tourist were the beds. The royal court had ringside privileges to view the king and queen in bed like our audience. 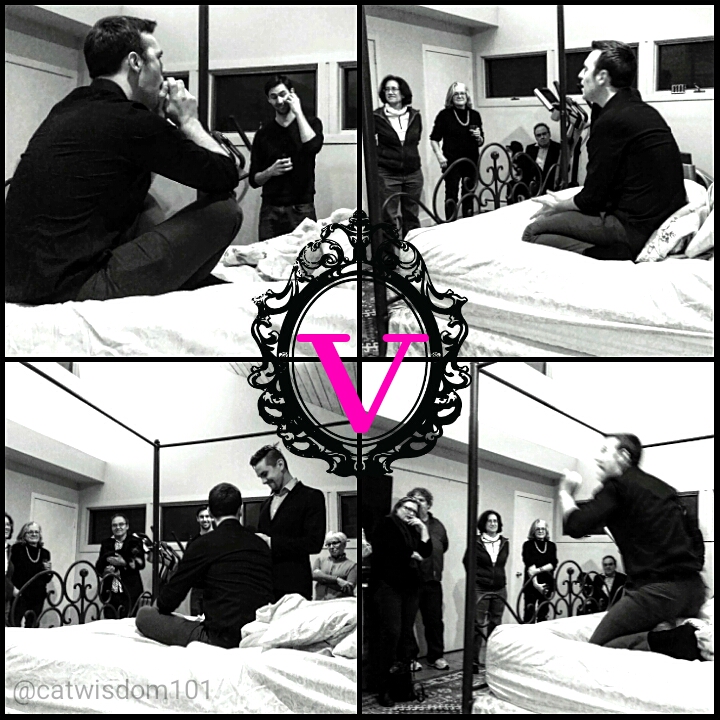 If that wasn’t intimate “fly on the wall” enough, the icing on the cake came in the bathroom. Yes, I sat on the toilet, lid down. We were a cozy bunch by then and one woman sat on the edge of the bidet.  None of could take our eyes off Jonathan Matthews. The tuxedoed, barefoot bathtub ninja did a dance performance that defies description. Bathtub ballet? The hip hop song It’s All About the Benjamins played and when the actor looked me straight in the eye, not three feet away, it was as close to an out-of-body experience as being abducted by aliens on The X-Files.

That dear reader is immersive theatre at its best. Oh, and you’ll never look at rubber ducks the same way again. 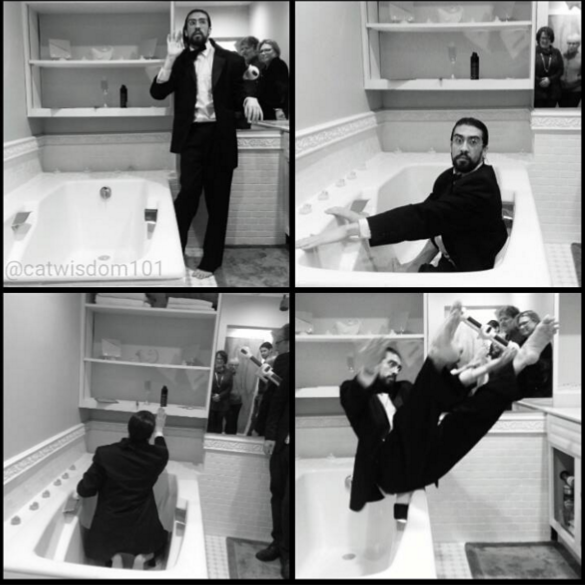 By the next room and performance, I was ready to sit on the floor in the corner and disappear but Caitie Goldie has us looking for her mascara as she regaled us about being vapid while putting on her make-up.  The superficial gloss scratched deep into identity and women’s issues. It’ll make you think about who is in the mirror the next you apply cosmetics. 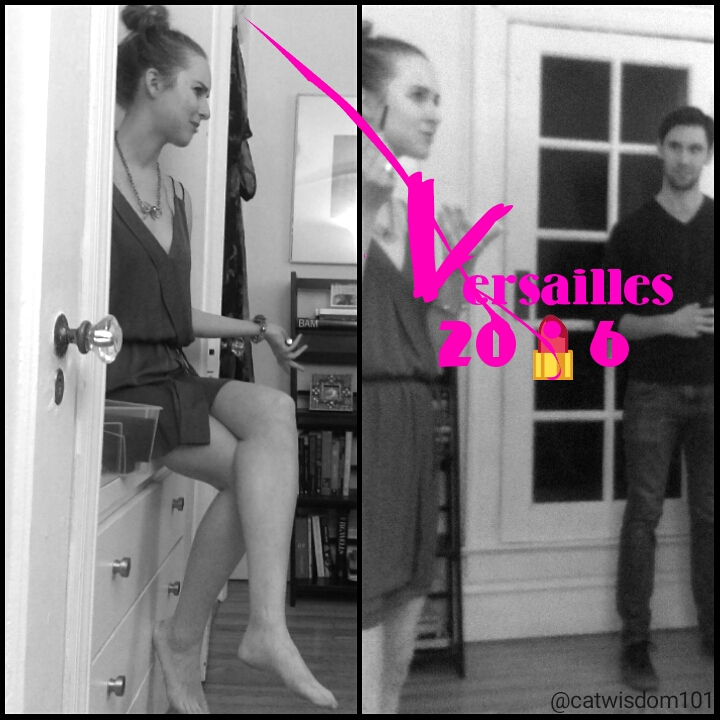 The evening ended with all of us regrouped in the living room again for the final performance and seamless segue into end-of-party mode. Like real parties, some people left while others lingered to nibble on snacks, chat with each other, the actors and crew.  I don’t like being the last one to leave a party, so can’t comment on any stragglers. I will say, it’s the best $25.00 I’ve spent in a long time. Versailles 2015 confirmed why I love live performance whether it be music, dance or theatre. It feeds the soul in a way an electronic box or screen never will.

If you’re in the NYC area, you’re in for a treat! There are new performances coming. 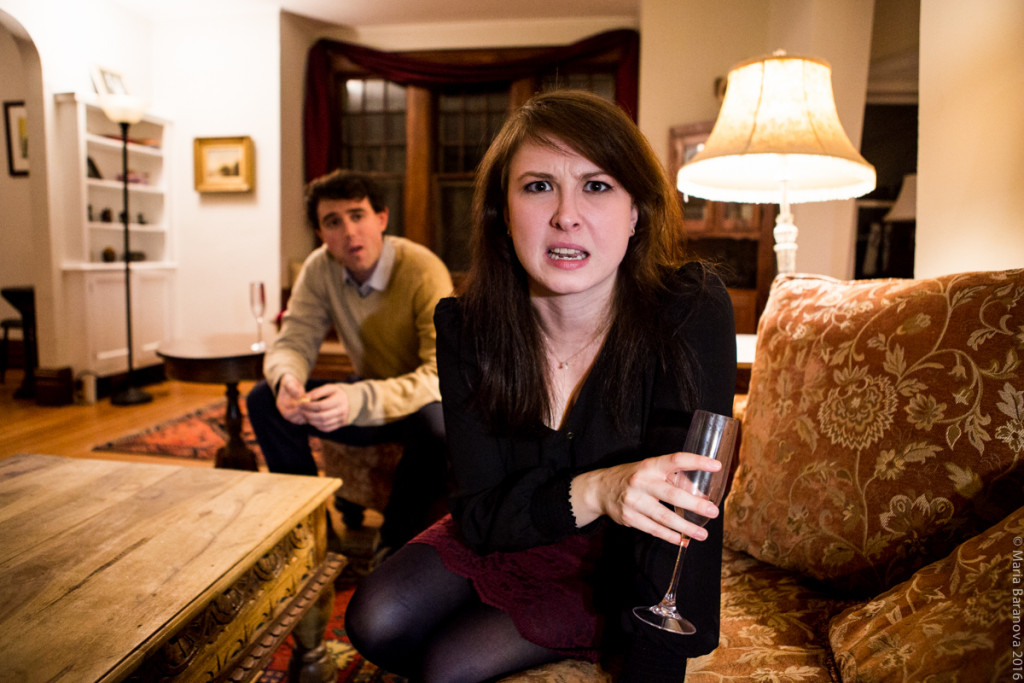 Versailles 2016 is conceived and directed by Erin B. Mee; written by Charles Mee & Jessie Bear with choreography by Jonathan Matthews and videography by Stefan Hartmann. Produced by This Is Not A Theatre Company.

Next performances are on Feb.20, March 4 & 5 in New York City. They sell out fast, so snap up tickets now or you won’t be eating cake. Ticket holders will be notified via email of the performance location 48 hours in advance.

Visit to learn more at ThisIsNotATheatreCompany